People can use computer systems for years without knowing about features that would be very useful to them. This is true even for productivity applications that people rely on for their livelihood, such as email, word processing, and spreadsheets. In testing intranets, we frequently find that employees are unaware of key enterprise features.

This seems like a paradox, because users would gain substantial benefits — potentially accrued over several years — if only they bothered to spend a few moments looking around the user interface. The ROI seems clear.

However, while users might have a mathematically true ROI from learning more about user interfaces, the ROI might not be so clear from a behavioral standpoint. The problem is that the investment occurs immediately: users must suffer the interaction cost of navigating through obscure parts of the user interface. In contrast, the benefit is deferred: users realize it only in small increments in some undefined future moments when they might use newly discovered features.

And then he provides tips on how to encourage learing. First among them: Fewer features.

Ryan Singer sums it up nicely. Some points I particularly liked:


The reason I am making a product is to give people capability they lack. That’s why they pay for it. The gap between the person’s current situation and the situation they want to be in defines value for them. They hire your product to do a job. The job is their definition of progress from here to there.


Some people think patterns are formal things written in a book or collection, but they aren’t like that. They are natural and spontaneous just like spoken language. We learn a language by hearing it and speaking it. Words, phrases, and constructions come to mind as if by magic.


This works against you when your work isn’t goal-directed. R&D projects and exploratory design don’t benefit from narrow problem definition. Platform and infrastructure projects are different in kind from product projects because the platform is meant to enable products on top of it, which are themselves targeted at specific situations.

An Essay on a Disadvantage of Abstract Software

I wanted to share five paragraphs of customer support conversation I’ve had with the rest of the team (two other guys). As I’ve IMed with one of the guys few minutes ago, I automatically went for the IM window. But first thing that stopped me was I remembered that sometimes the IM does not send longer messages. So I am thinking: “OK, there has to be some better way.”

Then it clicked: “Oh, wait, this is the sort of thing we have Basecamp account for!” And that led me to realizing one obvious disadvantage of abstract software.
END_OF_DOCUMENT_TOKEN_TO_BE_REPLACED

Ryan Singer is from 37signals and writes also his blog.


Researchers have identified over 18 visual cues wired into our brains and the list keeps growing. These cues range from the orientation of lines, thickness of lines and blinking, to the density of visual objects to motion, velocity and so on. The cues are illustrated below.

FROONT seems to be worth playing with.

I think this could work.


A jQuery plugin for creating slick, app look-alike sliding menus for you mobile website with only one line of javascript.

Modal dialogs built out of pure CSS. You know, if you can’t avoid it ;-)

Simple overlay instructions for your apps.


We must abandon invisibility as a goal for interfaces; it’s misleading, unhelpful and ultimately dishonest. It unleashes so much potential for unusable, harmful and frustrating interfaces, and systems that gradually erode users and designers agency. Invisibility might seem an attractive concept at first glance, but it ignores the real, thorny, difficult issues of designing and using complex interfaces and systems.

Nice article about the classic dropdown menu problem – the one with the mouse cursor path. Even better, the post ends with a jQuery-menu-aim thingy :-)

Think of it as a WordPress template but for your next web application.

Dieter Bohn and Ellis Hamburger writing for The Verge:


When Page took office, his first directive was clear. “Larry said ‘hey everyone, we’re going to redesign all of our products,’” recalls Jon Wiley, lead designer on Google Search. Wiley and co had just two months to give Google a fresh coat of paint, and to start thinking holistically about how Google as a whole was perceived. “We had a mandate to make this all look good,” Wiley says.

I would just add that, as Steve Jobs said:

And there is a lot of emphasis on the “looks” of things in the article and video. That said, the new Google Maps on iOS are great, better than Apple’s.


Image Picker is a simple jQuery plugin that transforms a select element into a more user friendly graphical interface. 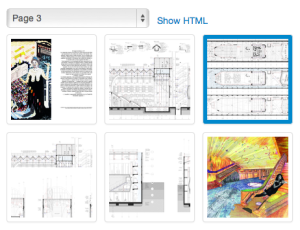